All that Collapses Must Converge 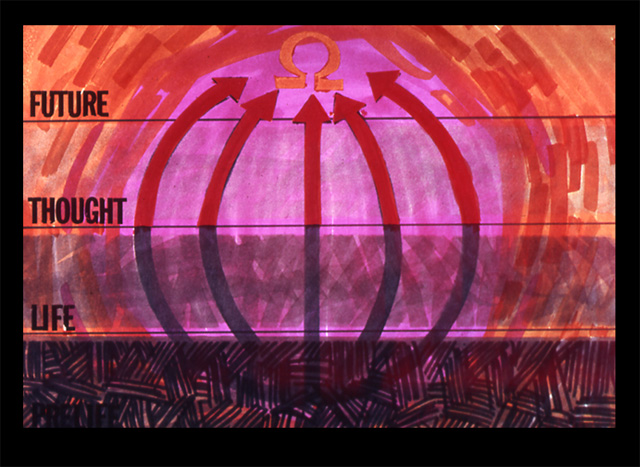 One of Teilhard’s most often-quoted lines is “All that rises must converge.” But in our present moment of evolutionary change, as the Anthropocene Era cross-fades into a new, as-yet-unnameable era, we are witnessing multiple convergent lines of looming catastrophe - climate change, overpopulation, migration, global pandemic, economic and social inequity, species extinctions - all converging into a self-reinforcing meta-catastrophe. We humans seem hell-bent on demonstrating that All That Collapses Must Converge.

The lines of collapse are meeting in a tipping point that does not at all resemble Teilhard’s Point Omega with its ecstatic awakening of the Noosphere unto itself.
In The Human Phenomenon, Teilhard offers a way of envisioning the gradual awakening of the Noosphere, the “sphere of reflective consciousness” around the Earth. “We only progress by slowly elaborating from age to age the essence and the totality of a universe deposited within us.”

A universe deposited within us! What a thrilling vision, inviting us to awaken, to lift our evolutionary face to an infinite starry sky!

Is this gradual awakening, Teilhard asks later, “…not unlike some great body which is being born — with its limbs, its nervous system, its perceptive organs, its memory — the body in fact of that great Thing which had to come to fulfil the ambitions aroused in the reflective being by the newly acquired consciousness that he was at one with and responsible to an evolutionary All?”
Then why are we not currently experiencing an ecstasy of culmination? Why are we instead set increasingly and desperately apart from one another and especially from the “evolutionary All”?
Because we have indulged in a crippling, if not fatal, paradox: In the self-ramifying expression of human consciousness over recent centuries, what we have been accomplishing is not so much the development of a great body with new senses, but rather the numbing and shutting-down of our ability to share in senses that were already present in the more-than-human conscious makeup of the Earth.

We have set aside our responsibility to “an evolutionary All” and have instead declared ourselves the Crown of Creation - the way Teilhard puts it is that we “find ourselves at the top of a pyramid.” From that imagined point of view, we look “backward” and inevitably discover what appears to us as a Privileged Axis of evolution, as Teilhard approvingly calls it, leading triumphantly to ourselves.
We mistake arrogance for awakening. The rest of Creation would look on in amusement, if our arrogance were not so catastrophically lethal.